Raymond Levantard, visual artist, has made his merry little way on the local art scene in Mauritius since 2015. 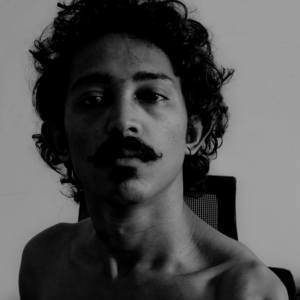 Raymond’s artistic purpose is to take us on a peculiar voyage: that of questioning the order that comes from chaos. The artist is inspired by his mixed origins. Raymond’s ancestors come from France, India, Madagascar, and Reunion Island. This genealogical mix enables him to draw inspiration from the palette of artistic and philosophical currents of his variegated ethnic background. Beginning to visit the land of his ancestors since 2018, the artist decided to immerse himself to observe social reality, cultural diversity and religion practices. From the posh area of Mumbai to the daily cremation at the Ganga in Varanasi or participating in a peaceful strike in Reunion Island, Raymond’s most sensitive observation is people and what keep them together. After a 3 months trip in India and in Nepal in 2019, the artist came up with his first solo exhibition in Mauritius at the Imaaya Art Gallery, entitled ‘‘Obscurantism’’. Challenged and thinking that to do a solo exhibition at Imaaya Art Gallery was a big step in his career, Raymond had a deep conversation within himself. Moreover questioning why he had chosen the path to be an artist. The gallery follows the artist since his inception in 2013, for later in 2015 allows him to make his first appearance on the art scene in a group exhibition, ‘‘Between the Lines’’ with 3 other emerging artists. In 2018, after a 3 weeks art residency program at the LUX St Gilles Hotel, Raymond made his first solo exhibition in Reunion Island entitled ‘’ Subject 1 – A stairway to nonsense ‘’. At that time, conflicted with his old self, Raymond fell in love and had the chance to be more stable emotionally. The art residency program was the first collaboration of Opus Art Gallery from Reunion Island and The Third Dot Gallery from Mauritius, allowing artists exchange in the Indian Ocean. The collaboration continues later where they allows the artist to exhibit his works at the ‘‘Affordable Art Fair’’ in Brussels, Belgium at the beginning of 2019. Freelance draftsman for interior design agencies since 2012, Raymond draws inspiration from design principles that he later applies to his art. Still collaborating with The Third Dot gallery, the artist exhibits his first sculpture, made with resin, acrylic perspex and metal for the group art exhibition entitled ‘‘Metaform’’ in 2016. With the emergence of street art culture in 2015 created by the Porlwi Festival and The Bridge Eco Art Festival, Raymond began to perform outside of his studio. It was the best way for him to share his art. That same year, for the Porlwi collective, he created frescoes on the walls of the Mauritian capital: one at Aapravasi Ghat, made for Porlwi by Light, and the other at the rue Joseph Rivière, made for the Chinese Food and Culture Festival. He became fascinated by this new expression while he was commissioned to do various mural art projects, such as the refubhishment of the Hennessy Hotel. Through the years of experimentation and creation, Raymond has developed a distinct style and his own approach to Art. The request of his artistic endeavour is such: let us question the forms imposed upon us. Let us observe the conflicts between the different subjects proposed. And beyond all, let us lose ourselves in these cascades of structures that intermingle and integrate with each other.