Born in 1929 and resides on the island of Mauritius. Roger studied painting with Gabriel Gillet and had as a professor Pierre Matossy in 1946 ( Grand prix de Rome). 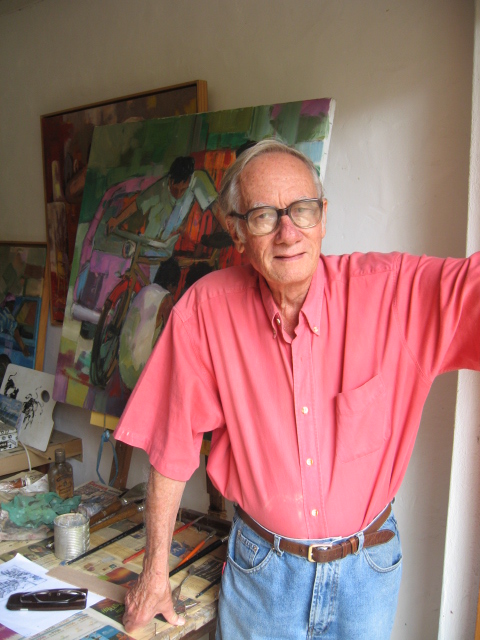 His first group exhibition was in 1947 at Town Hall of Curepipe with Hervé Masson, Serge Constantin and some young artists and in 1951 he was awarded ‘’le prix du peintre’’.

Roger Charoux obtained a scholarship to study fine Arts in London at the Central School of Art & Design and lived abroad for 5 years before returning to his native island where he not only continued to paint but also began teaching in various institutions.

He has exhibited in most galleries and venues in Mauritius. His paintings have been aquired both nationally and internationally. Roger Charoux’ art work is renown and has been offered to many personalities worldwide, such as Mr & Mrs Mitterand , Indian Prime Minister His Excellency Shree Manmohan Singh. President of Mozambique. His Excellency Joaquim Alberto Chissano and the President of the United Nations Mr Koffi Annan amongst others.

His long- lasting, friendly relationship with Malcolm De Chazal left a deep influence on his work. Spanish Art critic, Mrs Mercedes Carmona in « The identity of African Art in relation with European Aesthetics , Modern African painting» has defined Charoux’ work as having inffluenced contemporary African painters. However from 2008 onwards he has slightly changed his style and has been working extensively in contemporary art with group exhibitions at the ‘’Galerie de l’Aube’’, Floréal and a private exhibition at ‘’Color Attitude’’ Art Gallery in Moka in 2010 amongst others.
In 1989 he was attributed the “Grand prix International des Beaux Arts” in Paris.
1993 saw a group exhibition at The “Grand Palais, Salon d’Automne” in Paris “Les Plasticiens de L’Ile Maurice”.