Since my childhood I have always lived in an artistic environment. My father, a painter and stage designer, gave me the inclination for visual arts, my mother, literature teacher, gave me the sense of storytelling, the taste of writing. 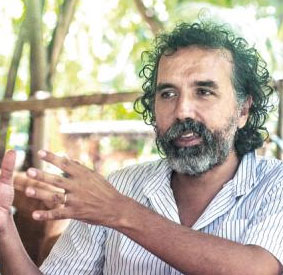 After studying cinematography in France, I settled back to Mauritius in 2002 with a few film projects in mind. Since then I had the chance to realize some of them. If I had to chose I would certainly retain my first documentary Diego the Forbidden (2003) about the deportation of the Chagossian people, and Lonbraz Kann, my first feature film (2014.)

Since my childhood I never gave up my other passion: painting and printing. Even if I consider it to be a hobby, painting remains for me a very important part of my life and a source of inspiration.

Because I am conscious of the chance I had to grow in a creative environnement, I also try to keep active in training young ones in various media fields, focussing at empowering them through the arts.