Born 1950- Mauritius. Media Utilised- Ink, Water Colour, Oil and Mixed Media. At 66, Jocelyn Thomasse says he believes in pain and hard work.” Only a little inspiration, the rest is transpiration.” 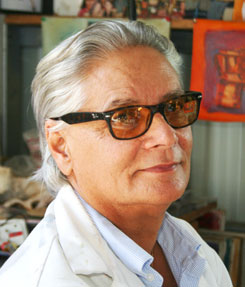 After years spent as a student in Serge Constantin’s studio which he joined in 1965, he reckons he has acquired basic skills but is still in the learning process. He talks about Picasso who was still painting at the age of 80 and was ever discovering things.

Jocelyn’s way is to paint on the spot. Drawing, he believes, is a prerequisite to painting. The painter likes to say that he takes a lot of pleasure in the work. “Creation is a great moment at the present time. One should not think about the end result. It does not matter. The important thing is to feel good, to enjoy.”

After a long banking career Jocelyn now dedicates himself exclusively to painting. His studio is located in the village of Cascavelle (West coast of Mauritius) and is open to the public on appointment Tel: (230) 5250 6502

. Galerie The Excellence of Art – 2012 (Les Nus de Jocelyn Thomasse)
. Took part in numerous group exhibitions of which the Salon d’Automne 1993 at the Grand Palais – Paris